A toast to the sun 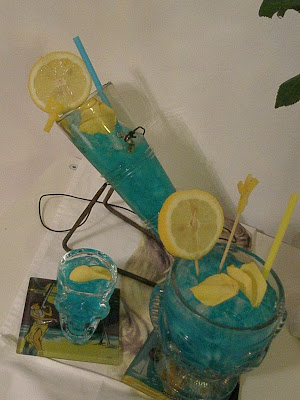 With Lord Bassington-Bassington's appreciation for Tiki culture, and penchant for creating drinks in honor of people that inspire him, it was only logical that His Lordship would start making drinks to go with his favourite bands. And as Lord Bassington-Bassington's favourite bands have a tendency to operate within the field known as neofolk, there were bound to be some strange things happening. 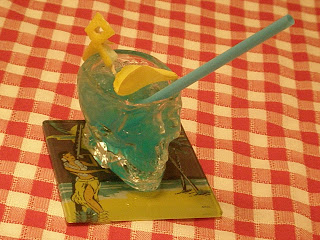 And to Lord Bassington-Bassington, the place where national romanticism (a key ingredient in neofolk) and faux-Polynesian pop culture collide is a heavenly kitschy and very inspiring place. Call it - why not? - National Roman-tiki.

So it it with a certain pleasure (and a certain level of inebriation) that we here at the Lord Bassington-Bassington Chronicles present the recipe for the Solblot, the drink in honor of the band of the same name. As Solblot is possibly the most Swedish band in existence, the idea was to create a drink that was equally Swedish, but still recognizable as a Tiki drink.

Shake all ingredients (except ginger beer) in a shaker with ice cubes until chilled. Pour, strained, into a glass, transparent Tiki mug or reproduction 12th century drinking horn packed with crushed ice. Stir in ginger ale. Garnish with a slice of lemon in the shape of a Northern sun and various other yellow accoutrements, such as yellow rose leaves or teensy-weensy runes carved from lemon peel.

Drink while enjoying some appropriate listening and reading. 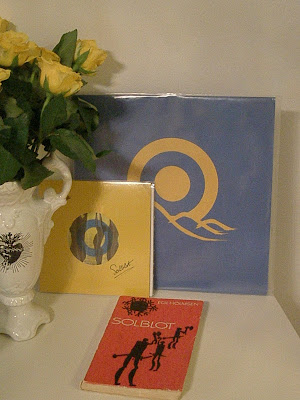 His Lordship would like to credit Fraulein Frost with the brilliant idea of adding rosemary - a perfectly Northern touch - to the Solblot. And thank Lady Mju for pictorial assistance, and the people who helped taste the drink while it was being developed.

A special thanks goes to the staff here at Bassington Manor who helped clean up the mess made by His Lordship. Basset paws are good for many things, but complicated shaking procedures are not one of them. 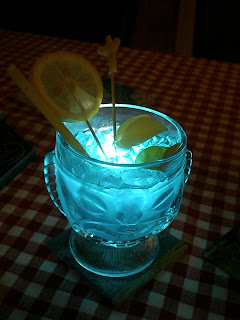 So - which is the next band that should be given the Tiki treatment?
Lagt inn av Lord Bassington-Bassington kl. Saturday, April 20, 2013
Etiketter: atrocious alliteration, musical musings, national roman-tiki