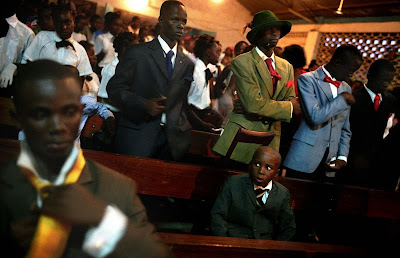 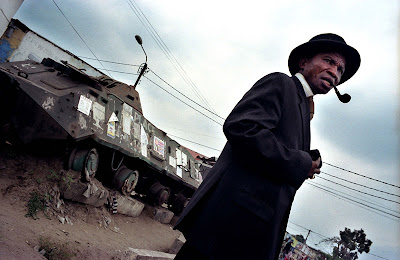 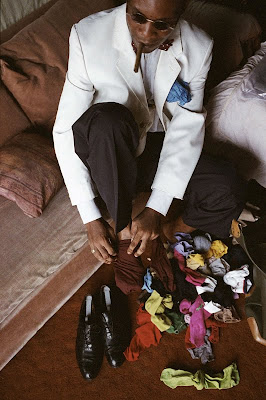 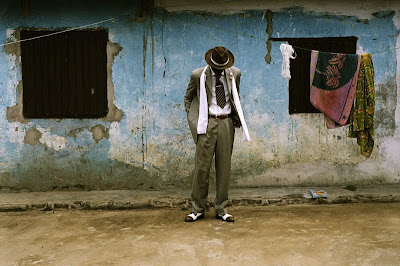 While the richest countries of the world increasingly worships "casual" style and pre-torn jeans, the spirit of style appears in some strange places.

As a Caninist, Lord Bassington-Bassington has mixed feelings about the new breed of Christian missionaries coming from the Global South to re-Christianize the West. But sartorial missionaries from the Congo would be welcomed with open arms.

After looking at renowned documentary photographer Héctor Mediavillas online exhibition of pictures of Congolese dandies, the so-called sapeurs, His Lordship simply had to share these pictures with his readers.

Not only are Mr. Mediavillas' pictures superb, his subjects are stunning. These African dandies maintain the best parts of European style, but, like many Africans, they excel in the use of colours that don't really look good on paler skins. Not only is the result a feast for anyone interested in style, the pictures also say something about a struggle for beauty and a faith in civilization that seems lost in the West.

Some background for this intriguring phenomenon is provided by the following text:

The arrival of the French to the Congo, at the beginning of the 20th Century, brought along the myth of Parisian elegance among the Congolese youth working for the colonialists. Many considered the white man to be superior because of their technology, sophistication and elegance. In 1922, G.A. Matsoua was the first–ever Congolese to return from Paris fully clad as an authentic French gentleman, which caused great uproar and much admiration amongst his fellow countrymen. He was the first Grand Sapeur.

Respected and admired in their communities, today’s sapeurs see themselves as artists. Their refined manners and impeccable style in their attire bring a little glamour to their humble surroundings. Each one has his own repertoire of gestures that distinguishes him from the others. They are also after their own great dream: to travel to Paris and to return to Bacongo as lords of elegance.