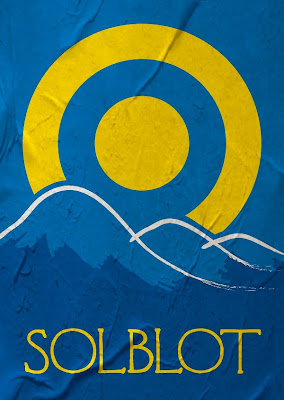 In Lord Bassington-Bassington's opinion, of the most inspiring and interesting bands in the Neofolk genre is Solblot. Solblot hails from Sweden, a fact that would be hard for anyone to miss. For Solblot might possibly be the most Swedish band in existence. 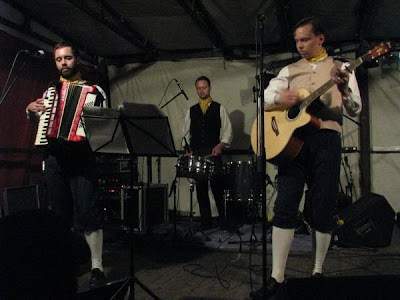 (Photo: Man from another planet).

The trio wears their own versions of Swedish folk costumes, complete with stylish yellow scarves. Their songs are all in Swedish, with lyrics taken from Swedish national scald Verner von Heidenstam. Von Heidenstam’s democratic nationalism permeates Solblot's attitudes and has made them turn their backs on folks who would use love of Swedish culture and identity to further a xenophobic and extremist agenda. 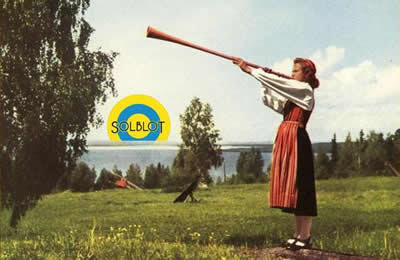 Solblot haven't been very active on the recording front, and so far have only produced a 7 inch record, Sommarsång & Soluppgång, which has been cleverly and tastefully designed to look like an old 78. But the band claims to be working on a whole album, which will hopefully see the light sometime this millennium. And you can always listen to a few songs on their MySpace page.

While Solblot's is quirky and charming in itself, the band really needs to be seen on a stage to be truly appreciated. For not only does the live format allow the band's punky energy to shine through, it also allows the audience to enjoy the fact that Solblot might be history's first National romantic boy band. So the video below, or the videos at the band’s YouTube channel might be a small substitute for those who don’t have the opportunity to see Solblot on stage.

And in any case, Lord Bassington-Bassington will always be grateful to these fine lads for travelling seven hours by bus (each way) to play at his and Lady Mju’s stag and hen party. Thank you yet again. The dedication of the song on the video above to Andreas Ritter only underscores what superb human beings you are.
Lagt inn av Lord Bassington-Bassington kl. Monday, November 16, 2009
Etiketter: atrocious alliteration, musical musings