History is full of fiery manifestoes that - well, manifested - some ideology or other. As a pup, Lord Bassington-Bassington was quite taken with The Futurist Manifesto of F.T. Marinetti, only to quickly realize how insane it was. "Demolishing libraries?" Well, try to demolish the bookshelves here at Bassington Manor, you scallywag, and see how well that goes!

Futurism is plainly passé. These days, discerning canines such as Lord Bassington-Bassington need more sensible manifestoes. Such as that provided by the superb publication The Chap, to which His Lordship naturally subscribes (being married to an upstanding feline has its advantages). 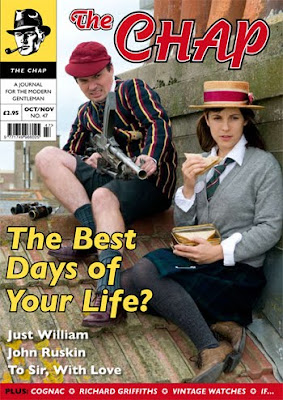 The Chap isn't just a very entertaining magazine, a parody of lad magazines, it is also a rallying place for those who find a world of tracksuits and SUVs less than appealing. And its ethos is very well put forth in The Chap Manifesto. This manifesto should be read in its entirety, but the short excerpts below (with permission of The Chap's editor, mr. Gustav Temple) gives you a taste of its brilliance.

The Chap Manifesto
Society has become sick with some nameless malady of the soul. We have become the playthings of corporations intent on converting our world into a gargantuan shopping precinct. Pleasantness and civility are being discarded as the worthless ephemera of a bygone age - an age when men doffed their hats to the ladies, and small children could be counted upon to mind one's Jack Russell while one took a mild and bitter in the local hostelry.

Instead, we live in a world where children are huge hooded creatures lurking in the shadows; the local hostelry has been taken over by a large chain that specialises in chilled lager, whose principal function is to aggravate the nervous system. Needless to say, the Jack Russell is no longer there upon one's return.

The Chap proposes to take a stand against this culture of vulgarity. We must show our children that the things worth fighting for are not the latest plastic plimsolls but a shiny pair of brogues. We must wean them off their alcopops and teach them how to mix martinis. 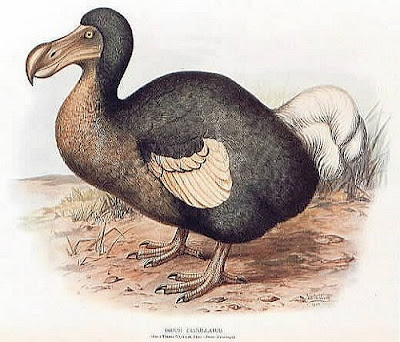 Lord Bassington-Bassington has pored over this Declaration, and declares that it provides more guidance than a floor-to-ceiling stack of postmodern tracts. As the excerpts below reveal.

The Dodo Declaration
The Dodologist is a project in the spirit of the dodo. While reality runs its course around us, we drink our tea and take note of the sufficiently unimportant with our virtual fountain pen.

The Dodologist is male and middle aged, rude, annoyed and elitist. He does agree than no one has invented a better political system than democracy – but still doesn’t like it.

The Dodologist is a self declared reactionary, but realizes that the best thing about the past is that it is past. It's not that they did everything well back then, but the past being past means we can focus on the good stuff.

And at least they didn’t have gangster rap. Or “psychics” solving crimes on television.

If you need more guidance than these two manifestoes can give you, then there's something wrong with you.
Lagt inn av Lord Bassington-Bassington kl. Thursday, November 12, 2009
Etiketter: atrocious alliteration, political animal