"As I descended with a Dog's blood rising"

To perchance compensate for slow blogging the last weeks, here is "Bloodstreamruns" by Nature and Organisation.

The slide show is a cavalcade of various members of the so-called "Great British Inbreeding", which, in addition to Nature and Organisation, also includes such people as the above-mentioned Mr. Tibet's group Current 93, Nurse With Wound, Sorrow and Death In June.

Roger Scruton on The new Humanism

When it comes to The Big Questions, such as the belief in the divine or a life after death, Lord Bassington-Bassington is a Caninist.

Now, if you have no idea what Caninism is, it’s probably because you are one of those arrogant people who don’t bother asking dogs about what they think. So in order to understand Caninism, think of it as a Humanism that instead of placing those slightly silly hairless apes at the center of things, focuses on the noble canine (while cats and dodos are seen as honorary canines). Basically, it is an attempt to live a moral life even if there is no Dog in Heaven to punish one's misdeeds.

As such, His Lordship has much in common with Humanists, and is occasionally inspired by more cultured, philosophical Humanist writers such as Georg Henrik von Wright. 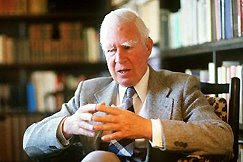 A while ago, that august publication, The Spectator, published a most interesting article by philosopher Roger Scruton, lamenting certain trends in today’s Humanism. While he in no way agrees with Mr. Scruton on most issues, Lord Bassington-Bassington has perused several of Mr. Scruton’s publications and has found many interesting thoughts there. 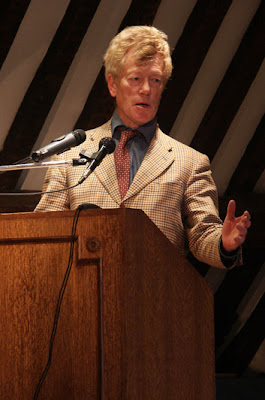 (Mr. Scruton in a moment of well-dressed pontification)

While Mr. Scruton’s article on Humanism suffers from several major flaws (such as the silly notion that humans are above other animals), it still contains interesting insights.

The entire article can be read here, while The Chronicles have taken the liberty of reproducing some especially interesting passages below.

Looking back on it, I see the humanism of my parents as a kind of rearguard action on behalf of religious values. They, and their contemporaries, believed that man is the source of his own ideals and also the object of them. There is no need for God, they thought, in order to live with a vision of the higher life. All the values that had been appropriated by the Christian churches are available to the humanist too. Faith, hope, and charity can exist as human causes, and without the need for a heavenly focus; humanists can build their lives on the love of neighbor, can exercise the virtues and discipline their appetites so as to be just, prudent, temperate, and courageous, just as the Greeks had taught, long before the edict of the Church had fallen like a shadow across the human spirit. A humanist can be a patriot; he can believe with Jesus that "greater love hath no man than this, that he should lay down his life for his friend." He is the enemy of false sentiment and lax morals, and all the more vigilant on behalf of morality in that he believes it to be the thing by which humanity is exalted, and the proof that we can be the source of our own ideals.

The old humanism was not a pleasure-seeking, still less a pleasure-loving philosophy. It took its inspiration from Enlightenment philosophers, from Milton, Blake, and D. H. Lawrence, and from the legacy of Western art. The humanist who most influenced me at Cambridge believed that in no works had humanity been more blessed by true ideals than in the St. Matthew Passion of Bach and the Tristan und Isolde of Wagner, the one a work of Christian devotion, the other a work that makes no mention of God or gods, but simply dwells on the exalted nature of erotic love when tied to mutual sacrifice. Although I was skeptical toward that kind of humanism, I never doubted its nobility of purpose. It was devoted to exalting the human person above the human animal, and moral discipline above random appetite. It saw art, music, and literature not simply as pleasures, but as sources of spiritual strength. And it took the same view of religion. Humanists of the old school were not believers. The ability to question, to doubt, to live in perpetual uncertainty, they thought, is one of the noble endowments of the human intellect. But they respected religion and studied it for the moral and spiritual truths that could outlive the God who once promoted them.

I never thought, when I finally put the old humanism behind me, that I would ever feel nostalgia over its loss. But now I recognize that it was not only noble in itself, but was also a serious attempt to retain the belief in nobility without the theological vision on which that belief had once depended. It was, in effect, a proof of the ideal that it proposed: an example of how human beings can provide themselves with values, and then live up to them.
Lagt inn av Lord Bassington-Bassington kl. Thursday, March 12, 2009 No comments:
Etiketter: atrocious alliteration, bassetological illuminations, religious reflections

Of the Wand and the Moon - solo in Oslo

Two pictures from Mr. Larsen of Of the Wand and the Moon's solo performance at the Heretical Cellar in Oslo last Thursday. 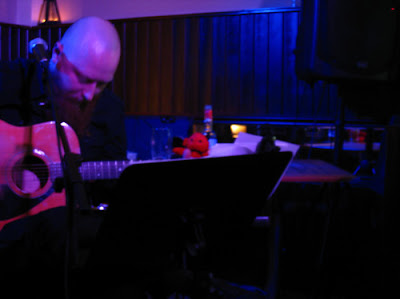 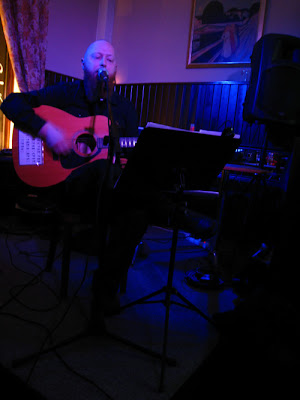 Pictures by Anders of Babyflesh.

Warrior Creed and the nobility of war

The German one-man project Apoptose has been one of Lord Bassington-Bassington’s favorite music makers over the last few years. Apoptose have often managed to capture something quite unique, especially with their debut album Nordland, which conjures up deep, almost mystical atmospheres.

They’re also one of the few people out there who can get away with sampling Arvo Pärt... 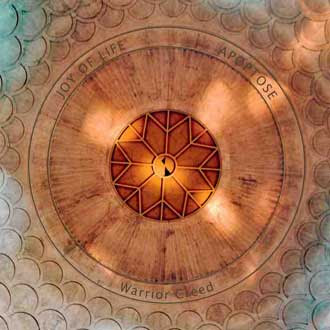 On their latest release, Warrior Creed, Apoptose team up with the long dormant post-punky neofolk band Joy of Life.

In their active days in the 80s the English band Joy of Life recorded a song, Warrior Creed, based on words written by an unknown Samurai in the 14th century.

Anyone even familiar with Japanese history cannot avoid having noticed the levels of sophistication which the art of war, and the philosophy of struggle, have reached in Japan. Like most manifestiations of human culture such a martial art can be used for good or bad, but that is beside the point here. For while most cultures with any sense recognize that the warrior’s work can be one of great nobility, few cultures have created a martial culture as sublime as that found, for example, in Miyamoto Musashi’s immortal work A Book of Five Rings (one of His Lordship’s favorite books on both history and war). 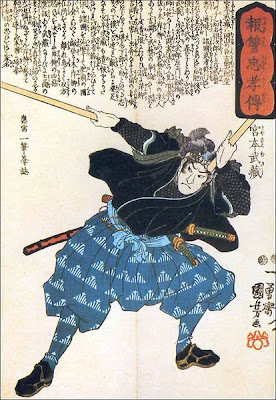 Or in that of the Warrior Creed.


To accompany these sublime words, Joy of Life vocalist Gary Carey's voice (which has matured a bit since the 80s) and Apoptose’s icy electronics are supported by the live drums of the Fanfarenzug Leipzig. This means a whole troop of drummers that give the performance an incredible punch and precision.

The short clip below is from a live performance, with a different vocalist, and sadly does not do the vinyl rendition much justice.

Warrior Creed comes in a 12 inch vinyl housed in one of the most impressive gatefolds His Lordship has seen in a while, in a limited edition of 444 copies. Anyone interested in Industrial music would do well to secure a copy.
Lagt inn av Lord Bassington-Bassington kl. Wednesday, March 04, 2009 6 comments:
Etiketter: atrocious alliteration, musical musings

Party politics and the advantages of extremism

Being a Basset of very little brain, Lord Bassington-Bassington isn't really a political animal. But the party political broadcast below comes uncannily close to describing His Lordship’s political instincts.

Sadly, this party political broadcast was not a great success with the voter. It is, as someone pointed out in the comments section, "too witty and satirical to be effective mass propaganda".

Or, perhaps, the public simply fell for the party political from the Norwegian Party. 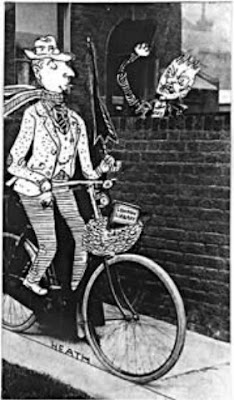 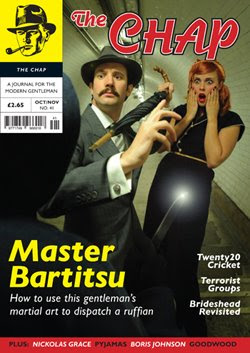 Anyway, the best bits of the Young Fogeys seem to live on in The Chap, a magazine that His Lordship has been following for a while. And he has just been informed by his better three-quarters that a subscription to this excellent publication has been procured for his upcoming birthday.
Lagt inn av Lord Bassington-Bassington kl. Sunday, March 01, 2009 1 comment:
Etiketter: atrocious alliteration, style counsel
Newer Posts Older Posts Home
Subscribe to: Posts (Atom)