The boutonnière - a fresh-cut flower worn on one's lapel - is one of the most outrageous style statements a traditiontal-minded male can make. As such, it is probably only a question of time before a certain droopy-eared Lord will make the plunge. 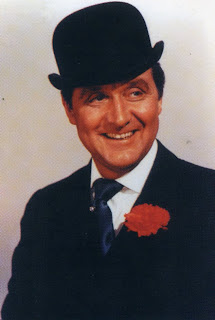 
But when, like Lord Bassington-Bassington, one moves in circles where even a jacket can be seen as a bit excessive (and let's not even mention His Lordship's penchant for bow ties...) it can be a bit daunting to show up sporting a boutonnière. One needs some way to practice, to ease into it.

So thank Heavens for The Knottery, a Canadian company that produces beautiful felt flowers for one's lapel. The flowers are as beautiful as any boutonnière, but the discreet fabric and size makes them less ostentatious. 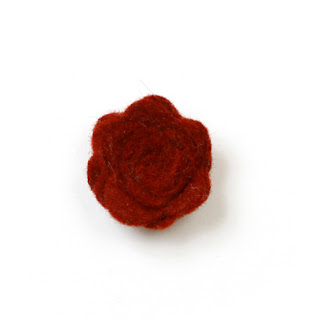 Being a sucker for the classics, Lord Bassington-Bassington went for the red rose version. A solid neofolk pick, we'd say. But with a price of just 8 US dollars for such a beautiful, hand-made item, there probably isn't really any excuse for getting other colours as well.

But this is when the challenges start. How do you match these flowers to your pocket hankies? 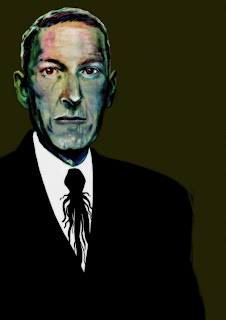 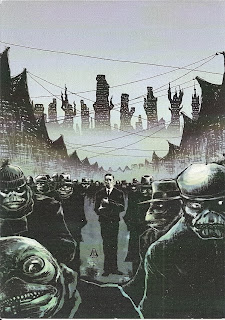 As these Chronicles have previously reported, Bergen-based comic artist Kim Holm has been working on an expanded version of his excellent adaptation of H.P. Lovecraft's short story Pickman's Model.

The new edition, which has just fallen into the paws of Lord Bassington-Bassington, has several new pages which seem to be chiefly devoted to studies of the architecture of Boston. This is a great enhancement to the story, and it's not just because nothing builds the Lovecraftian atmosphere like some proper New England brickwork and gambrel roofs. For Pickman's Model as written by Lovecraft is, of course, a long monologue and Mr. Holm's previous adaptation suffered a bit from this. But with the updated edition the monologue is broken up a bit. There is less talk, more thatch, and things start to really work.

This is a Lovecraft adaptation as it should be: Faithful yet creative. It captures the Gentleman of Providence's bleak vision perfectly. In fact, this might well be the best adaptation of a Lovecraft story that Lord Bassington-Bassington has seen, and His Lordship is a somewhat compulsive collector of Lovecraftiana. 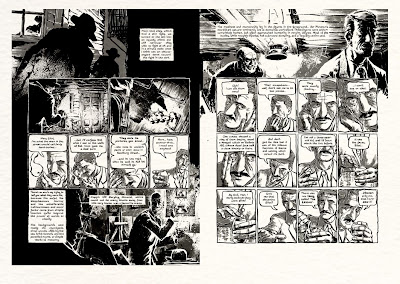 The proper release is at the end of August, through online shop Indyplanet. There is little information online so far, but Mr. Holm's own website could also be a place to find relevant information soon.

It is hard to recommend this book enough. Not only is it eminently worth having, but one can also support a true graphic artist. An artist who have even done some excellent studies of Lord Bassington-Bassington, and who is also involved in other matters Lovecraftian.

That said, this release does not come without a bit of drama.

The press release - in Norwegian, and not available online - includes a somewhat oblique shot aimed at none other than Lord Bassington-Bassington himself, as explained by Mr. Holm, in the postcard below. 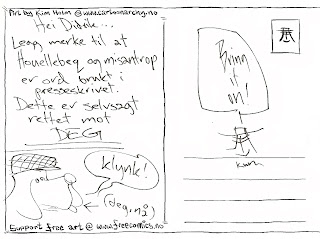 We realize that this is in Norwegian and needs a bit of inside information for outsiders to work out what's going on, but in short, Mr. Holm has mentioned Michel Houellebecq's description of Lovecraft as a misanthrope in the press release. As Mr. Holm knows full well that we here at the Chronicles disagree with Houellebecq's thesis (Lord Bassington-Bassington maintains that Houellebecq's book about Lovecraft is an attempt to reshape Lovecraft in the french writer's mould) Mr. Holm is clearly anticipating a fight.

Indeed, Sir! Lord Bassington-Bassington is about to dispatch a team of highly trained Basset assassins - so-called Bassassins - to Bergen. His Lordship recommends that Mr. Holm start glancing over hs shoulder when he is out and about. Well, over his shoulder and then downward, as Bassets are low-slung. So, in case the Bassassins fail in their task (Bassets are known to be a bit hard to motivate) all this awkward glancing is sure to give the damn cartoonist chronic back problems. Hah! 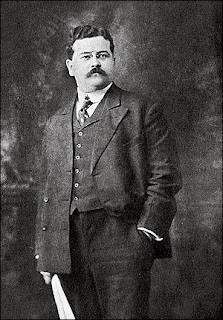 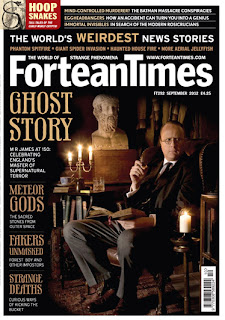 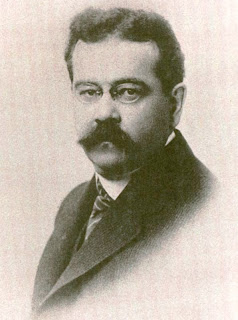 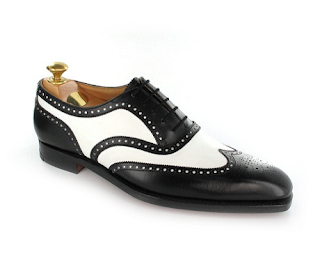 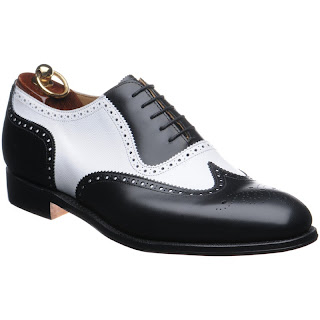 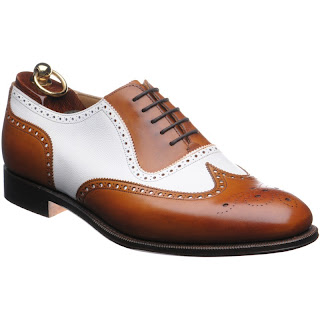 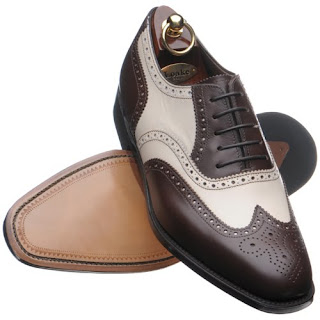 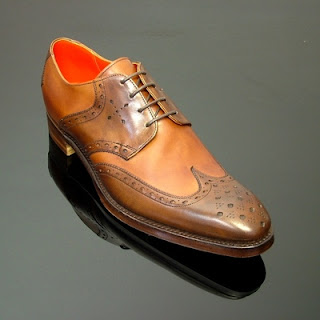 French label Autre Que are working on a limited vinyl re-release of the Fire + Ice record Rûna. In Lord Bassington-Bassington's perhaps not so humble opinion, Rûna is a record that really deserves the luxury treatment. 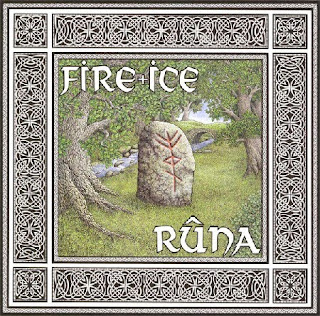 Bassets have of course played an invaluable role in cultural history, and quite a few of them have made appearances on television. But few Bassets have become greater media stars than the trusty partner of famous TV detective Columbo. This canine, with the simple, elegant name of Dog, was an important part of one of the most popular and critically acclaimed detective series of all time.

This study of Dog and his detective sidekick comes courtesy of the fabulous Tini Malitius. 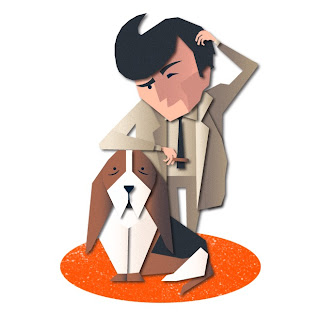 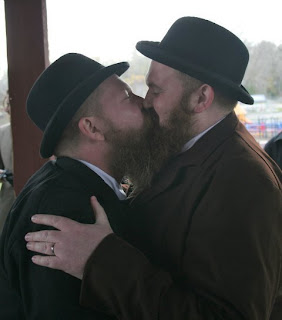 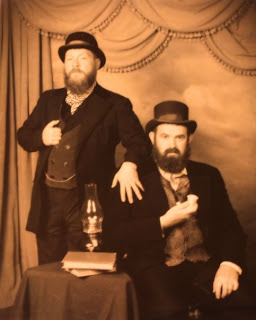 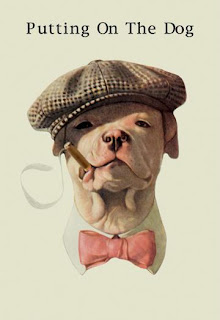 Well, after all, it is Wednesday. 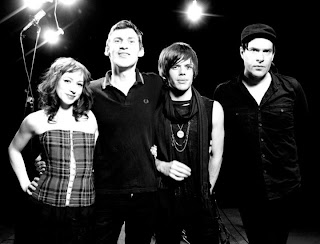 (Photo courtesy of Tom Eileen, who also filmed this live set of the band)

This is just small post to remind readers - and Lord Bassington-Bassington himself - that one of His Lordship's favourite bands in recent years have a new album coming soon. They're touring, too. 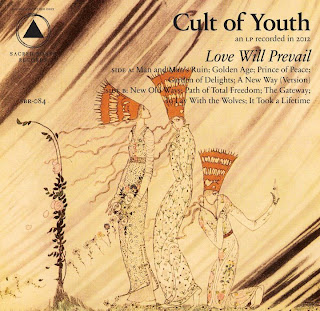 Some teasers are available on that Internet thing.

The art of contemporary heraldry

When the World’s Coolest Librarian makes one of his regular visits to Lord Bassington-Bassington, it is usually the start of some terrific (and slightly nerdy) adventure. Yesterday was no exception, when The Librarian gave His Lordship a short introduction to the subject of contemporary heraldry. Contemporary Canadian heraldry, to be exact.

As His Lordship takes a keen interest in the invigoration of old traditions, Lord Bassington-Bassington was all ears (and when one is a Basset hound, there are a lot of ear to be!)

His Lordship could only agree with The Librarian that heraldry needs more exposure in the media. And as the Lord Bassington-Bassington Chronicles is, at least in the loosest sense, part of the media, we will shoulder our responsibilities and hereby bring our readers a selection of some of the coolest Canadian coats of arms. 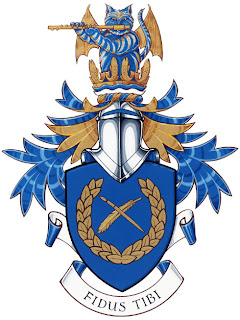 Dr. Missao Batts is a lady with an appreciation of felines, and a love of music (surely something we here at the Chronicles can relate to). And as for the good lady's last name, well, look at the wings of the cat... 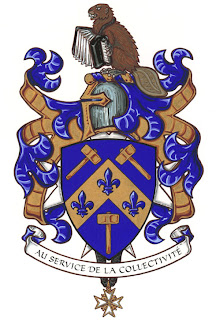 While Mr. Pierre Masse's love of music gets combined with the national animal of Canada. 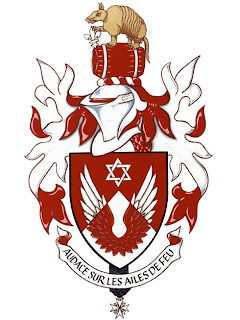 And Mr. Howard Berlind Ripstein shows what a superb coat of arms one can create when one is a military serviceman descended from Jewish bootleggers. 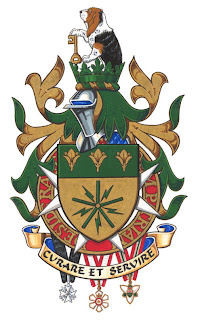 But the highlight for Lord Bassington-Bassington is, for obvious reasons, the coat of arms and flag of radio broadcaster Douglas Graeme Bassett.

In His Lordship's mind, this short run-through of contemporary heraldic masterpieces leads to one inevitable conclusion: It is high time for the Bassington-Bassingtons to create a coat of arms of their own. Perhaps The Librarian could lend a helping paw?