Technically, Basset Hounds aren't hibernating creatures. But, biology be damned, Lord Bassington-Bassington is prepared to make a good try at it!

As a result of this, it will be difficult to get His Lordship to dictate the Chronicles (let sleeping Hounds lie, and all that), so the Chronicles will be dormant ‘till the New Year.

We'd also be thankful for an explanation as to why you voted the way you did; please use the comment space for this.

As those of you (both of you?) who have followed this blog for a while will know, Lord Bassington-Bassington isn’t very good at keeping up with the pace of modern life. There are too many books, films and records coming out for a poor Hound to keep up.

But while snooping around MySpace the other day, Lord Bassington-Bassington came across a little gem of a record. Admittedly, it’s been out for a few months, but after ordering, receiving and listening to it, His Lordship felt the need to share some information about This Immortal Coil.

This Immortal Coil is, simply put, an ensemble creating acoustic interpretations of the songs of legendary electronica band Coil.

The project name This Immortal Coil is an obvious tribute to This Mortal Coil, the “supergroup” put together by label 4AD Records back in the 1980s and consisting of people from bands like Dead Can Dance and Cocteau Twins. This Mortal Coil released some of the most exquisite records ever produced in Britain, and were especially engaging when they interpreted songs by other bands and artists, such as Tim Buckley’s "Song to the Siren" or Big Star’s "Kangaroo".

This Immortal Coil, which is what we’re really talking about here (pardon the digressions, Bassets are prone to wander) do essentially the same thing with Coil’s back catalogue. 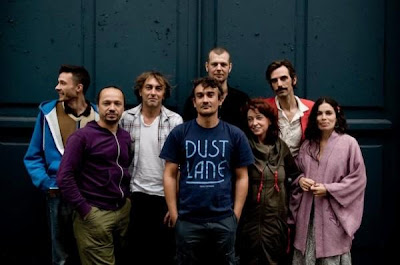 While it’s probably a misnomer to refer to any of Coil's songs as ”hits”, This Immortal Coil's record also functions as a sort of ”greatest hits” compilation, collecting many of Lord Bassington-Bassington's favourite Coil songs. But then, His Lordship holds that Coil are at their best when they write songs, instead of just creating electronic structures (which they are, admittedly, terribly good at). As this collection of interpretations reveals, these songs stand their ground well outside Coil’s soundworld. And let’s admit it: That songs function when played by other people is the true test of songwriting.

And because it’s Vinyl Appreciation Week here at Bassington Manor, we had to show you this picture of the vinyl edition of the record. It’s released in a lavish gatefold which contains two Long-Playing records with an added 7 inch single with two extra songs, and a beautiful poster. 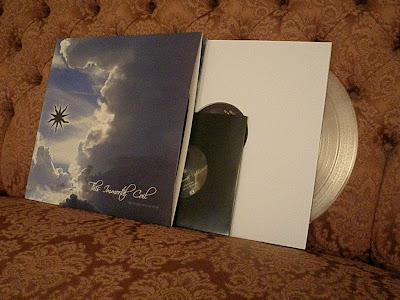 The LP’s are on beautiful, transparent vinyl. But it’s also available on CD, for those of you stuck in the digital age.

As the vinyl revolution rolls on, labels that release superbly presented records start to pop up. We here at The Chronicles are proud champions of German label Trumpets of Doom, but we think it's time to look at what else is available out there.

Portugese label Extremocidente produce records so beautiful that Lord Bassington-Bassington ordered us to put together some snapshots of the releases that have found their way to Bassington Manor.

Extremocidente’s records tend to sell out very fast, so most of these are no longer available. But be warned: Once you get caught in their net, you might not be able to escape. These releases are addictive, even if they do have some minor flaws. For example, Extremocidente really need to start using better glue.

Extremocidente's latest release is this cute little slice of yellow vinyl, collecting two ultra-rare early tracks by Death in June that have never been available on vinyl before. 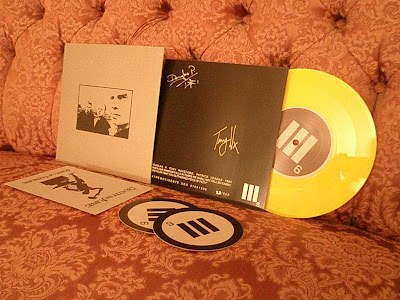 It might be strange to use the word "cute" to describe a release by a band that comes up with lines such as "Earth explodes with the gas of bodies", but what other word could cover it? To make it even cuter, it's designed to look like the little brother of Death in June's first LP release, Lesson 1: Misanthropy (which is not an Extremocidente release, we just had to put them together). 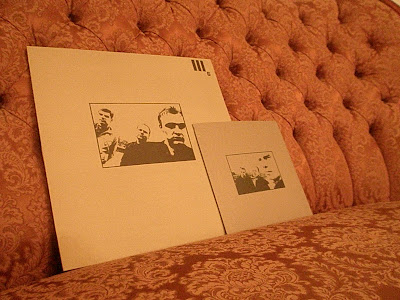 Okzidentalisches Grammophon is a live record by Danish industrialists Die Weisse Rose. Pressed on beautiful, transparent, steel-grey vinyl, the record is a fest for the senses, and it's not bad to listen to, either. But then, Die Weisse Rose have always been a band made for live appearances. 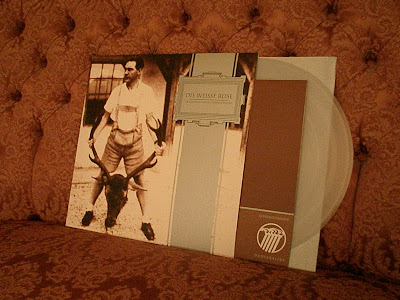 The Affordable Holmes is Orchestra Noir's tribute to the Sherlock Holmes series starring Jeremy Brett. It's a wonderful little record, pressed on beautiful vinyl, brown as an aged whiskey. 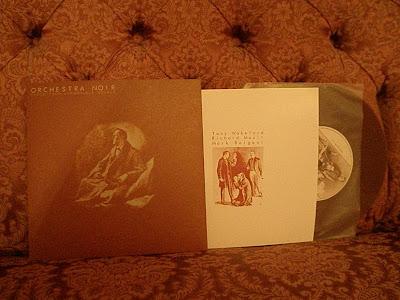 It's also available on CD. 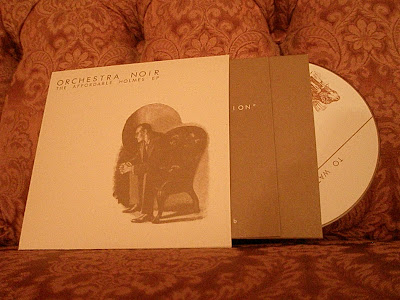 Extremocidente have produced some really stunning box sets, but, sadly, only one of them have found its way to us here at Bassington Manor. And that is the re-release of Sol Invictus' The Killing Tide, in a box filled with goodies such as pins and small prints. A real treasure box! 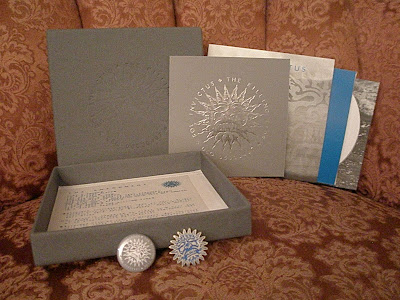 We tried to put the box back on the shelf, but too late. The latest inhabitant to move in here at Bassington Manor, that young rascal Winthrope Montmorency Bassington-Bassington III, immediately claimed the box as his own, and he snarls and snaps at us when we come too close. Help! 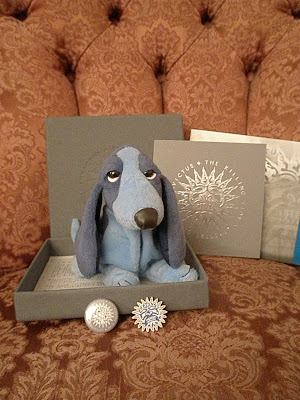 Lord Bassington-Bassington is a bit below the weather these days. Thus, there will be less blogging. So in the meantime, here's some quick pictures of His Lordship's favourite cufflinks, pieces of metal which usually help to cheer him up. 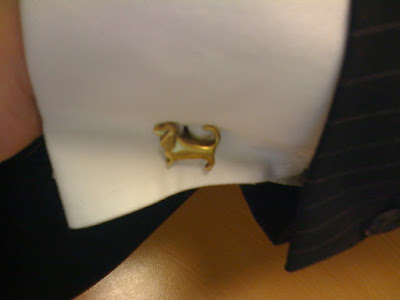 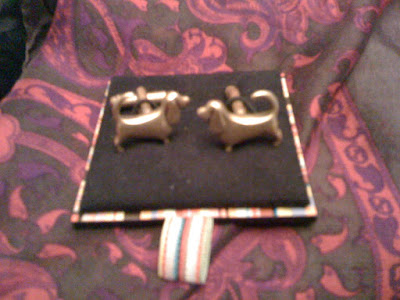 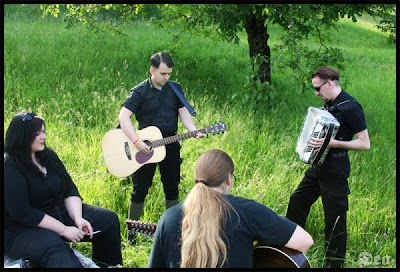 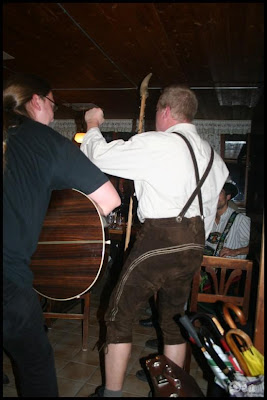 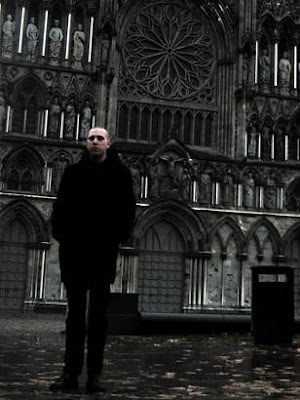 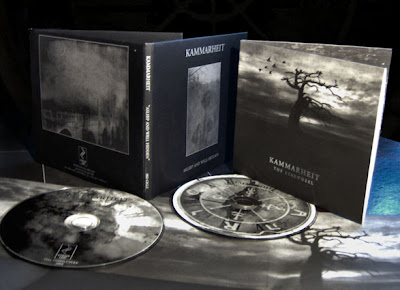 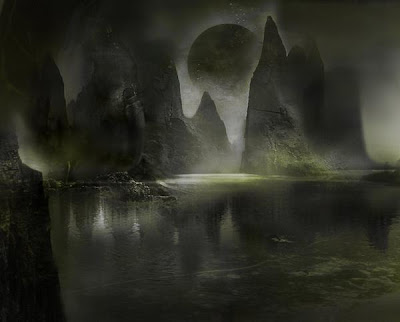 
Whichever name he chooses to work under, Mr. Boström's involvement seems to be a guarantee of quality. His sound, while comfortably conforming with the conventions of the Dark ambient genre, and thus not too different from, say, a band like Inade, stand out by their sheer craftsmanship. His music creates atmospheric cocoons conductive to soft, dark dreams. Such cocoons are more needed than ever in this increasingly noisy, garishly lit world.
Lagt inn av Lord Bassington-Bassington kl. Tuesday, December 01, 2009 1 comment:
Etiketter: atrocious alliteration, Lovecraftian lore, musical musings
Newer Posts Older Posts Home
Subscribe to: Posts (Atom)