Over the years, Lord Bassington-Bassington has reached the point where he will don a tie or bow tie on practically every weekday and social occasion.

You know how it is: You feel naked without a jacket, a jacket needs a pocket handkerchief, and then it all looks wrong without an ironed shirt (which of course is no fun without cufflinks), and an ironed shirt looks sad without some neckwear, and suddenly you're dressed to the nines even if you're only popping out for a pint.

Well, possibly you don't know how it is. Because you just might be a sensible person, because most people are more sensible than Lord Bassington-Bassington. Who, in his defense, is a Hound, not a person.

So this blog post is simply a small assortment of pictures that Lord Bassington-Bassington has found himself returning to for examples of more casual looks that still cut a dash. 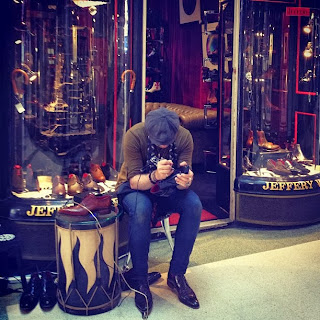 This picture comes straight from the Facebook page of Jeffery-West, His Lordship's favourite footwear outfitters.

Because cultures such as mod and skinhead are good places to go when you need to dress down. 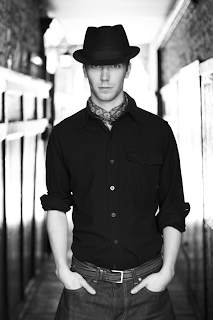 This has been shamelessly lifted from the web page of esteemed milliners Lock & Co. And yes, naturally His Lordship ended up getting a hat or two from them. 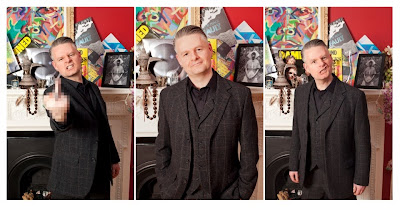 While this picture of Scottish journalist Vic Galloway is ripped from the Facebook page of tweed dealers Walker Slater, another of His Lordship's favourites.

So, apparently, Lord Bassington-Bassington is now at the point where he considers a three-piece suit to be casual clothing as long as one dispenses with the tie and pocket hankie.

Could someone please refer His Lordship to some sort of dress rehab?

Lord Bassington has a deep and abiding interest in various religions, ranging from Satanism to Sufism and with a special passion for various expressions of the Christian traditions, be they conventional, more novel or utterly out there.

When the push comes to shove, though, Lord Bassington-Bassington remains a Caninist of the secular variety, waddling through life without any faith in gods or an afterlife.

So finally, here is a theology that even a Caninist and Atheist can get solidly behind. 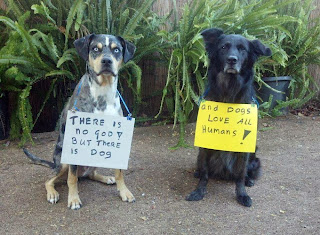 (Photo from the Interwebs, thanks to Fraulein Frost for the tip).

Yes, we know. Lord Bassington-Bassington is on a fast track to Doggy Hell.

Corduroy jacket are not just hard wearing - they can also be hard to wear. This is the reason why an olive green cord jacket has been haunting the wardrobe here at Bassington Manor for a few years now. There is nothing wrong with the jacket itself, quite the opposite in fact: Its manufacture is excellent, as it was snached at a sale at a Hackett supplier in London. The problem is how to wear it. How do you accessorise a cord jacket? 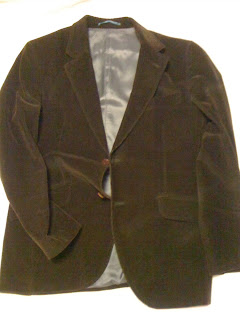 As the reader can clearly see, the jacket is a bit too much "geography teacher". Now, teaching is a noble profession, and Lord Bassington-Bassington occasionally finds himself giving lectures (or at least waving his paws and going "woof woof" a lot). But on such occasions, His Lordship tends to prefer tweeds.

So what can be done to liven up this jacket? Perhaps it would be an idea to match it with a fair isle sweater (from Cordings) and a knitted tie (picked up for a couple of euros from a Swedish webshop that was changing its collection). 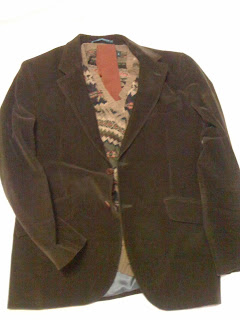 Ummm, what was that about "geography teacher" again?

So here's another idea: Fill the jacket's lapels with badges and other neofolk bling for a slightly post-punky look. 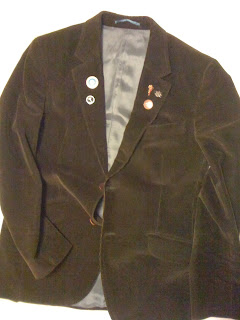 Again: No. The badges don't work at all. Perhaps they would work better if they advertised the Socialist Worker's Party and FNL Solidarity or something. And then we're not even in teacher territory anymore, we're in leftist teacher territory. Not to belittle the great leftist teacher Lord Bassington-Bassington was exposed to in younger years, but they werem't exactly style icons.

While there are certainly leftists that can out-dress anyone on the right, Lord Bassington-Bassington is more comfortable with a more conservative look. So perhaps the jacket can be saved by a touch of tweed - a reassuringly reactionary fashion statement? 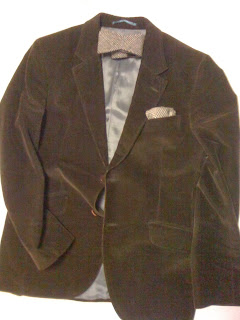 No. Njet. Nein. Nie. The pocket hankie and bow tie don't work at all.

But there must be a simple fix, an all-round accessory that can elevate any outfit. Perhaps... 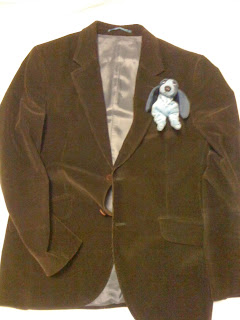 Well, there we are. Perfection! Winthrope always helps out.