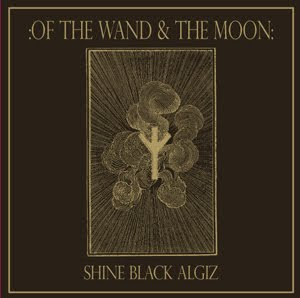 Lord Bassington-Bassington has long been an admirer of pop combo Kraftwerk, who prove that Germans can make pop music as well as classical music (that they know their neofolk is beyond all doubt). And as he thinks bicycles are a rather splendid invention (if a little impractical for Basset hounds), he has enjoyed Kraftwerk's tributes to the Tour de France races.

But while his lordship find both the music and images in these two versions of Kraftwerk's "Tour de France" are very enjoyable, there seems to be something missing. His lordship can't quite put his paw on it, but it is possibly something... sartorial. Perhaps the film below can shed some light on the matter?


The fetching chap-hop on the soundtrack is, of course, by Mr. B the Gentleman Rhymer.

Oh, how Lord Bassington-Bassington sorely wishes he could attend this year's tweed run. Some day, though. Sigh.

Sometimes, Lord Bassington-Bassington comes across a song which perfectly captures his mood. And this happened yesterday.

Perhaps this is a sign that his lordship should attempt to attend 6 Comm's farewell concert this summer. If they let him in, that is. Club owners tend to be prejudiced against Basset hounds - claiming that they slobber, sniff the scrotums of strangers and pee in the corners. As if that makes the noble Basset different from the regular clubber! 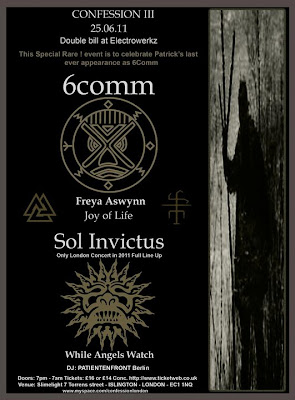 It is quite possible that David Carter (whom Lord Bassington-Bassington first stumbled across in the book The New English Dandy) is the world's most exciting interior designer. And Heaven knows Bassington Manor needs an interior designer. Even if things are slowly underway, with cuckoo clocks and absinthe fountains and a glass painting and whatnot, there is a lot to do to bring his lordship’s residence up to scratch. 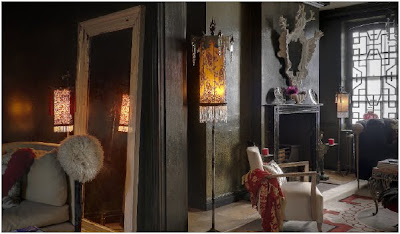 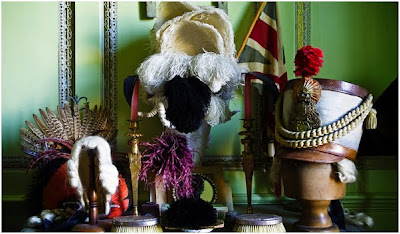 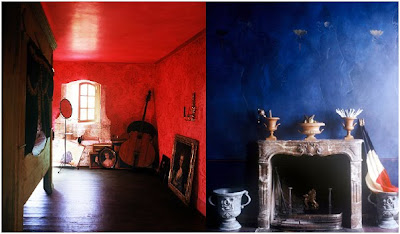 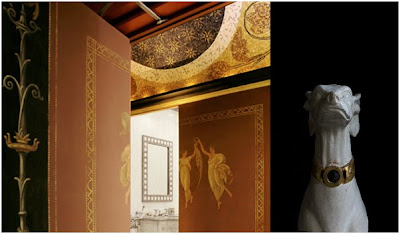 But stylish as Mr. Carter's interiors undoubtedly are, they might not be suitable for his lordship's needs anyway. For with the sheer volume of books, records and other treasures making their way into Bassington Manor these days we fear that this arrangement might be the only realistic approach. 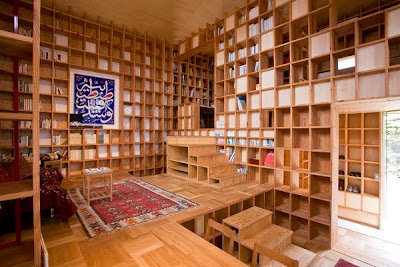 We are pleased to bring some pictures from last Saturday's instalment of the Café Grössenwahn, featuring a book release from the excellent Swedes at Malört förlag and a superb concert from Simone Salvatori of Spiritual Front. Thank you so much to everyone who made this evening something unique. 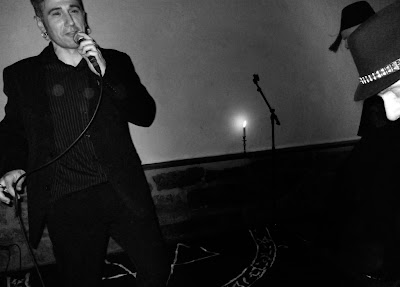 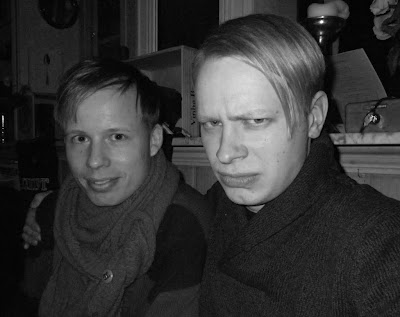 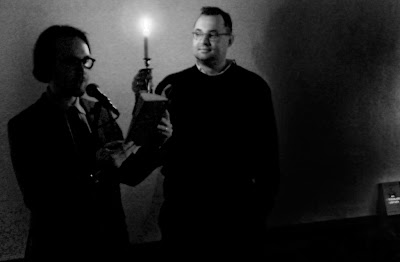 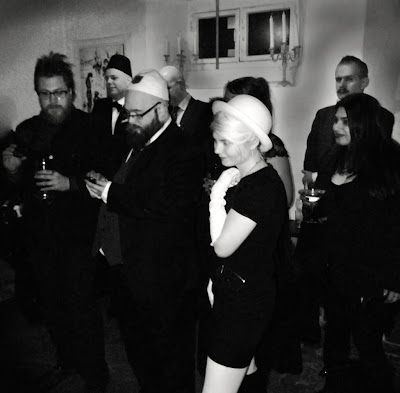 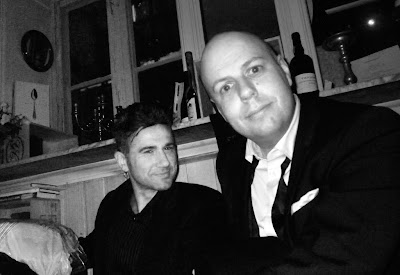 Cult of Youth in concert

As New York's Cult of Youth is one of Lord Bassington-Bassington's favourite neofolk bands, his lordship couldn't resist sharing this televised performance with the readers of the Chronicles.

It's an understatement to say that his lordship is looking forward to their new album, scheduled to be out later this month.
Lagt inn av Lord Bassington-Bassington kl. Monday, February 21, 2011 No comments:
Etiketter: atrocious alliteration, musical musings, televised delights

The beauty of the ukulele

When Frank Zappa famously asked the question "Does humour belong in music?", Lord Bassington-Bassington assumed that it was rhetorical – as there can only be one sane answer to Mr. Zappa's question. But it's important to remember that humour does have its dangers.

Much as Lord Bassington-Bassington enjoys what people like the Ukulele Orchestra of Great Britain and Mr. B the Gentleman Rhymer are doing with the ukulele, he does have a certain fear that it can cause the instrument itself to become some sort of joke. Much like what has happened with the pan pipes or digeridoo (the pan pipes of the backpacker generation). 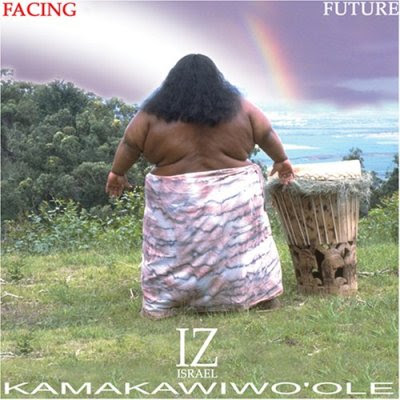 Luckily, there is always the native-born Hawaiian singer Israel Kamakawiwo'ole. A few bars of Mr. Kamakawiwo'ole’s music, and one is readily reminded of what a truly beautiful instrument the ukulele can be.

Lord Bassington-Bassington also recommends a gander at the lyrics to this song.

cry for the gods, cry for the people
cry for the lands that were taken away
and in it you'll find Hawaii

This is, quite possibly, what Forseti would sound like if Andreas Ritter were born in Hawaii. Though the lyrics remind more of Fire&Ice.
Lagt inn av Lord Bassington-Bassington kl. Saturday, February 19, 2011 2 comments:
Etiketter: atrocious alliteration, musical musings

It's not just Bassington Manor that is in urgent need of a makeover, these Chronicles also need a bit of redesign. This poses a bit of a problem for Lord Bassington-Bassington.

As a Hound with a highly limited understanding of modern inventions such as venetian blinds, ziplocks or blog platforms, Lord Bassington-Bassington isn’t exactly a prime candidate for web design. And as regular readers of this blog should know, getting good help is so hard these days, so His Lordship's humble secretary isn't much to rely on in this area, either.

Thankfully, there are people who are both kind and competent on whom His Lordship can rely. One of them is His Lordship’s dear friend and inspiration, the gentleman behind the Dodo Declaration and a bit of a blogmeister.

Another is the wonderfully talented illustrator Tini Malitius (also known as A Little German) who has produced these charming sketches, which perfectly capture His Lordship's character. His Lordship is at a loss for words to express his gratitude for these, but mutters something along the lines of "ahrooooo!" 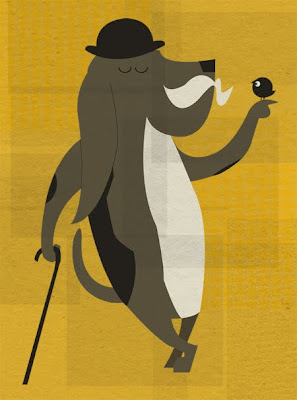 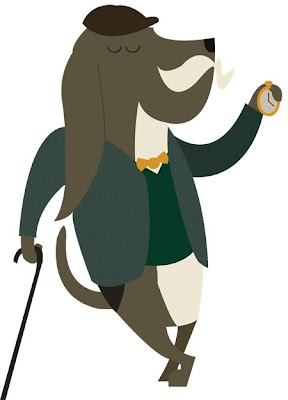 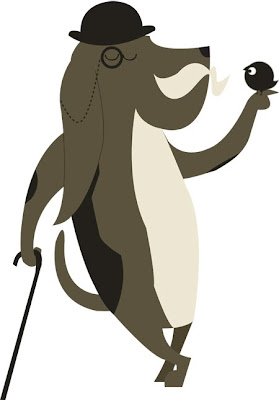 So there we have it, dear readers. The only excuses for not redesigning the blog immediately will have to be put down to Lord Bassington-Bassington’s inherent slothfulness and, of course, the shocking and shameful fact that Lord Bassington-Bassington has to – shudder – work for a living. But yet again, the wonderful Miss Malitius, creative as ever, comes to the rescue with this constructive suggestion as to how His Lordship's impecunious situation can be corrected. 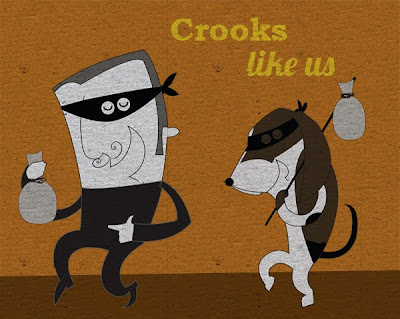 It's hard to furnish a mansion in a manner that is properly lordly on a pauper's salary. Still, Lord Bassington-Bassington does the best he can in the currently ongoing project of overhauling Bassington Manor. And now that the Manor has finally got a cuckoo clock, His Lordship decided that this touch of neofolk might as well be carried on to other parts of the house. Two small examples are shown below. 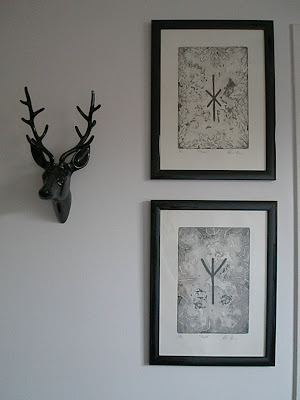 These runic designs were created years ago by Don Bota and have finally found a place on a wall. 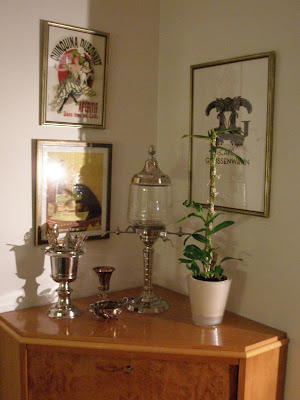 On heathen ground with Weh

To say that Norwegian neofolk is rare is a bit of an understatement. There's a healthy freak-folk scene (not to be confused with health freaks, who are much less interesting to listen to). On this front, Phaedra’s debut album is a recent shining example.

But something that can be classed as neofolk? Very little.

One exception, of course, is Gyron V, from whom we're still waiting for a debut on Sweden's legendary Cold Meat Industry label (Gyron V's Traditionalist EP is so limited that it's probably useless to hunt for it). 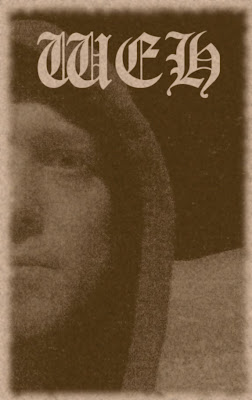 But then there's the slightly enigmatic Weh. We here at the Chronicles have no clue about this project or the gentleman behind it, though we vaguely remember trying to contact him a number of years ago. In the meantime, a double compact disc has been released, but Weh remains as mysterious as ever.

Weh frontman Erik Evju does not play concerts or release many records, but both from the music and the company Mr. Evju keeps (Weh participated on a tribute album in honour of the departed frontman of metal band Windir) we would guess that, like many of the newer neofolk musicians, he has a background in metal music. But as Lord Bassington-Bassington himself occasionally enjoys shaking his head so that his ears flap against his nose, would be the last to hold a bit of headbanging against someone. 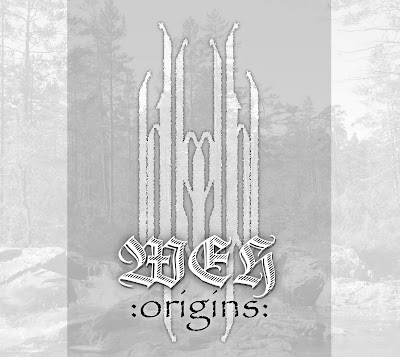 But then, tunes about runes tend to get His Lordship interested. And the wonderfully gloomy "The Bells are Ringing Doom" is also a very well-crafted track.

While hunting for some new winter boots, Lord Bassington-Bassington came across these pictures on a website selling finer footwear, and felt the need to share them with the readers of the Chronicles. Not just because the boots are rather fine, but because the man who wears them might very well be the most stylish person in the world. 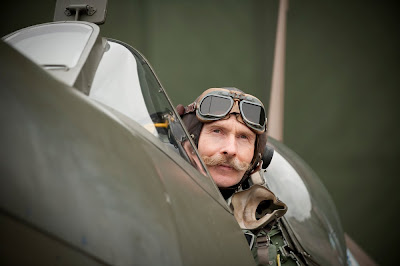 While overalls is not a natural first choice of attire for the well-dressed gentleman, Mr. Brown overrules all normal rules of dress. For not only does Mr. Brown sport immaculately polished boots, he flies a Spitfire for a living. A Polish Spitfire. 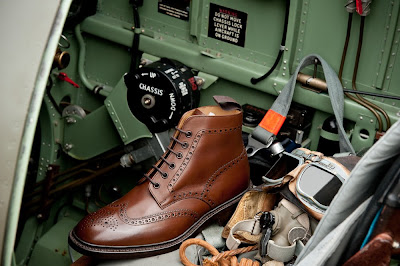 As the pictures from this news story shows, Mr. Brown even has a taste for stylish neckwear. 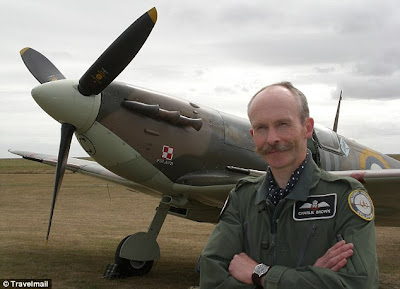 Overall it is, it seems, impossible to be more dashing than Mr. Brown. Unless, of course, one is John Steed. Or is equipped with the natural elegance of a Basset hound.

While it's probably unrealistic to try to get a job in the same field as Mr. Brown, these pictures does remind Lord Bassington-Bassington that there are some very nice Spitfire cufflinks on offer. Perhaps it's time to invest in a pair. 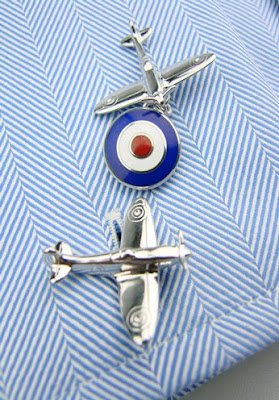