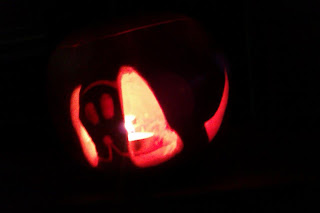 Live at the Lodge

Because Lord Bassington-Bassington is on a bit of a record shopping spree these days, and is just putting together an order for (among others) this new release from Of the Wand and the Moon. 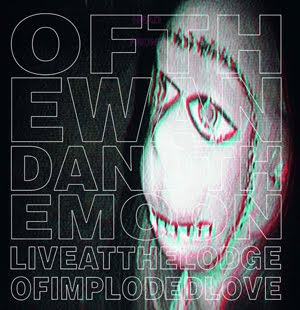 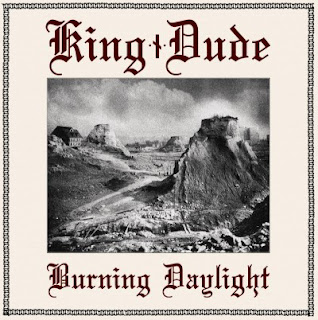 King Dude, a - well, dude - that Lord Bassington-Bassington has been following for a while now, has a new twelve inch out. And His Lordship just received notice that a copy of it has been shipped from Van Records. 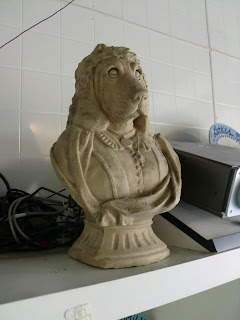 This fantastic Basset bust was spotted in a coffe shop in New Jersey, USA, by the family (or perhaps "servants" is a more apt term) of the good Gustav Beowulf of Lulubelle. Lord Bassington-Bassington thanks heartily for the permission to use the picture, and is frantically trying to find out how to get something like this for Bassington Manor...
Lagt inn av Lord Bassington-Bassington kl. Monday, October 22, 2012 4 comments:
Etiketter: artistic achievements, atrocious alliteration, bassetological illuminations, illustrious interiors

Since we're still a bit in Oktoberfest mode her at the Chronicles, here is a traditional Bavarian song as interpreted by an Englishman in front of Japanese. Because globalisation isn't all bad.
Lagt inn av Lord Bassington-Bassington kl. Friday, October 19, 2012 No comments:
Etiketter: atrocious alliteration, musical musings 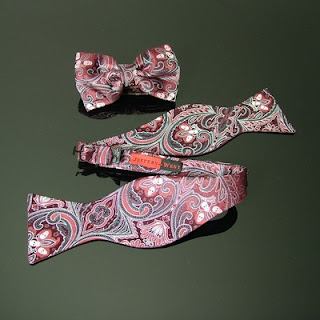 Recently, Lord Bassington-Bassington found himself chained outside a cinema in the West End of Oslo. As a consequence, His Lordship had plenty of time to watch workers leave their offices, and reflect on their appearance. And what struck the good Hound was how pervasive the trend of wearing suits without neckwear had become.

This is a bad idea. The reason is that men's business suits tend to be made of dark and, let's face it, rather drab material. The reason for this is, of course, that men prefer to look... well, masculine. And that businessmen prefer to look like… business. This is fine. But it is also why neckwear is so necessary.

For it is through the choice of ties, bows, cravats, pocket handkerchiefs and similar accessories that one injects individuality into the suit. It is the matching of tie and hankie, or the more dapper bow tie that shows your personality through the rather uniform look of the business suit.

Thus, remove the neckwear (and hankie) and you remove the personality. 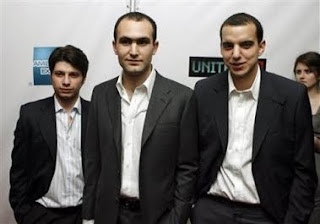 It is perhaps ironic that it is when you dispense of the tie that you actually achieve the corporate drone or conformist look that you're desperately trying to avoid. It gets even worse when Nordic men try to unbutton the top two or three buttons of their shirts, a look that one needs darker complexions to carry off. A typically pale Nordic chest should, as a rule, never be inflicted on one's fellow citizens.

While Lord Bassington-Bassington is obviously above working, having a job is nothing to be ashamed of (after all, somebody has to take care of certain important matters). Fitting in is no sin either. So embrace the fact that you are wearing a suit by complementing it with accessories that show your personality. And celebrate your gender.

If you don't want to take Lord Bassington-Bassington's word for it, listen to our old friend Major Hoad lecture on the subject.

And if that isn't enough to convince you, here is famed Soho tailor Mark Powell musing on ties: 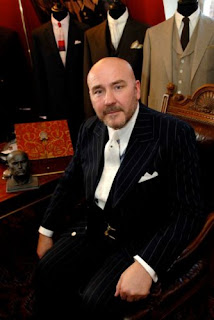 “I'm all for individuality but not wearing a tie with a suit just isn't cool. People think wearing a suit with an open shirt is somehow anti-uniform. It's not. It's cheesy TV presenter.”

(from this article, which is admittedly rather cheesy too).


There are, however, times when a suit without silken accessories would be acceptable. One example would be if you are a devout Muslim and find yourself praising God at an Islamic holy site. As certain Hadiths proscribe the wearing of silk for men (though like all Islamic teachings they are hotly debated), and Islamic holy sites tend to be located in climes where a woolen tie would simply not work, skipping the tie is perfectly acceptable on such occasions. 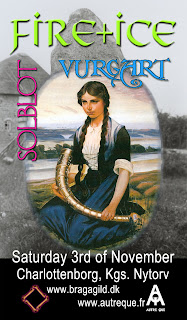 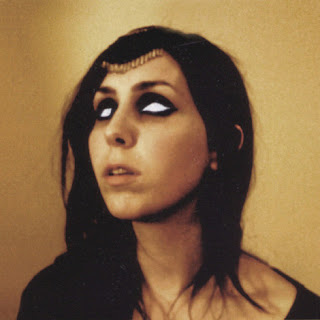 Just some press pictures from Iranian-Norwegian Karen Nikgol's new piece The Silent Song Of the Sphinx. Because, let's face it, who can resist a theatre/performance piece where one can see Aleister Crowley play chess with Fernando Pessoa, Heinrich Himmler hunt a Yeti and some stunning ritual scenes?

All coloured in shades of Jodorowski and Anger and set to the music of Norwegian experimental maestros Tarfield? 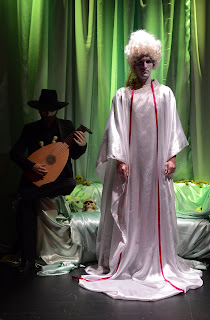 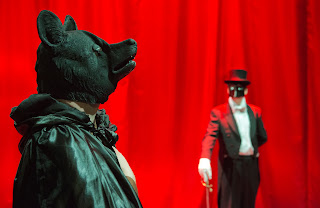 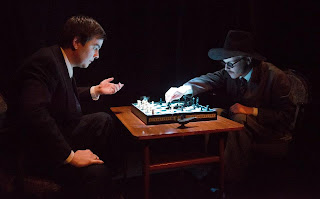 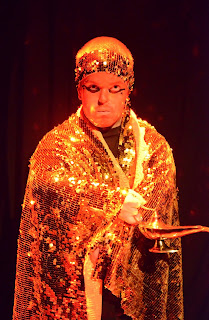 Malört, one of Sweden's most exciting small presses and certainly the best dressed, has a new book out. Varulven (The Werewolf) is a reprint of a classic from 1943, a study of werewolves in Swedish folk traditions by pioneering anthropologist Ella Olstedt.

And damn if it doesn’t seem like an absolutely essential addition to the library here at Bassington Manor. For not only is lycanthropy an extremely interesting subject in itself, wolves are canines (though less evolved than the noble Basset hound) – which of course makes the book even more relevant. 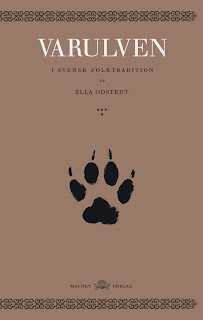 Another factor that makes this publication a near compulsory purchase for any Swedish-reading person with a taste for the weird is the fact that Malört, being a small press, is going through a rough patch. So helping them by purchasing the book is probably a religious obligation for any decent individual out there.

The book isn't just a stand-alone thing, either. It comes accompanied by a CD with music inspired by the lycanthropic, created by an assortment of great neofolk and folk artists, from Birch Book to Hedningarna. This record, of course, has the added advantage of being enjoyable for people who can't read Swedish. As we've come to expect from Malört, the book is produced to the highest standard. Indeed, bibliophiles of a sensitive nature might perhaps want to stay away from Malört. For Dog only knows that Lord Bassington-Bassington feels faint from merely glimpsing the paw print on the front cover. 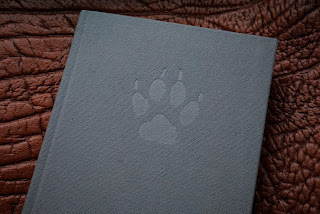 And the interior is just as dizziness-inducing. Oh, the caninity! 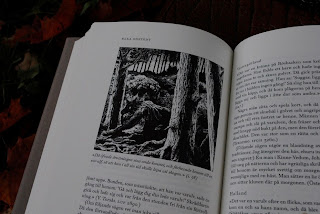 Lord Bassington-Bassington hasn't had time to sink his teeth into the book yet, but is quite optimistic. For a small hint about the quality of the contents can be gleaned from the picture of Ms. Olstedt below. Admit it: With a writer this stylish, you just know the book has to be great, don't you? 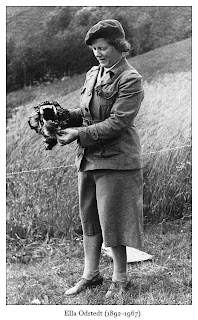 So now, as the evenings grow shorter and nights grow darker up here in the North, Lord Bassington-Bassington is looking forward to a bit of hibernation on the sofa, curled up with some properly canine reading material. Perhaps His Lordship will turn into a Were-Basset? Anyway, with our deeply psychic powers we can foresee that Lord Bassington-Bassington will be recreating some classic movie dialogue.

The Oktoberfest tends to drag on a bit here up North, possibly so it won't crash with Fårikål season. But who cares anyway. Just as when you're a Goth, every day is Halloween, for Alpin-folk fans everyday is Oktoberfest. So it is time for another update on the subject. Oktoberfest revisited, if you will.

Despite being a Norwegian, Lord Bassington-Bassington loves the Oktoberfest. For while these festivities are no doubt a more Southern phenomenon (most things are Southern when you're from Scandinavia), His Lordship likes to mix cultures.

For not only can a striving for cultural purity be unhealthy; cultural crossovers can become utterly sublime. Still, we here at the Chronicles are a bit unsure what to make of this outfit proposed by Lord Bassington-Bassington in what His Lordship refers to as the "Anglo-Alpine style". 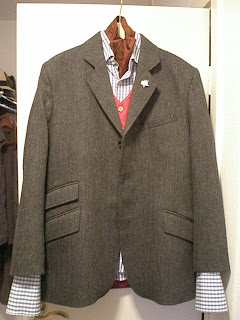 Tweed hacking jacket, made to measure, by David Saxby.
Shirt, quite well-worn at this point (Hackett shirt) by Morris.
Cravat by New & Lingwood.
Tracht-vest purchased second hand in Salzburg.
Edelweiss pin (what Lord Bassington-Bassington likes to think of as a "Bavarian buttoniere") purchased in Munich.

But anyway, here is a small selection of Oktoberfest necessities from Sturmpercht, Jännerwein, Waldteufel and other appropriately Alpine artists. The delightful drinking vessel is, appropriately enough given the theme of this update, purchased in a second-hand shop in Poland. 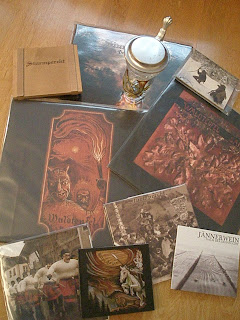 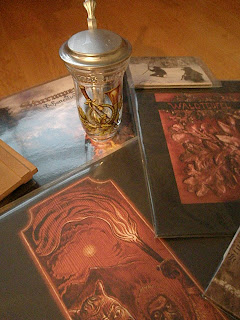