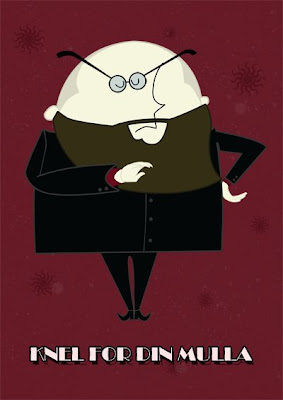 With our support for Caninism, we might not be very religious here at Bassington Manor. Still, we believe that any blog worth its salt should have its own Mullah. And indeed The Chronicles does.

The Mullah goes by the name of Hastur, and though he likes to title himself as “the Mad Mullah” and we do not like to question his wisdom, the good Mullah’s fatwas (religious advice) seem both sane and sensible to us. And as long as our Mullah issues fatwas that suggest we join English clubs and purchase fine footwear, we stand solidly behind him.

Recently, the good Mullah proclaimed a competition to honour him (and win the picture at the top of this post, created by the wonderful Tini Malitus), and we here at the Chronicles jump at the opportunity and thought we’d go for a poem. No, not the unique genre of "gothic slam poetry" we’ve developed here at Bassington Manor (more about that later...) but rather something more more traditional. That is to say, a combination of two traditions, namely by Japanese haiku and Sufi poetry.

So this short Sufi haiku is our humble contribution. We call it "Mevlana mullah".

This might not perfectly adhere to the formal rules of a haiku, but our love and devotion for our Mullah transcends all man-made boundaries. Lord Bassington-Bassington would like to express his desire to join his Mullah in the whirling dervish dance, his ears flapping to the glory of Allah.