The Process Church - a ritual resurrected 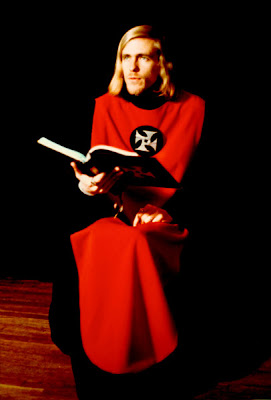 Of all the world’s churches, sects and cults, the Process Church Of The Final Judgement remains one of those who have most captured Lord Bassington-Bassington’s imagination.

The Process Church was short-lived and miniscule sect, long vanished in the mists of time, but their ideas were highly interesting and they have also had an influence on a lot of music Lord Bassington-Bassington enjoys. Ranging from ur-neofolk band Changes through Psychic TV and even Skinny Puppy and Funkadelic.

To put it much too shortly, the Process Church was a result of the mixing of modern psychology and ancient religion that so characterized the religious subcultures of the 1960s. The Process Church started, oddly enough, as an offshoot of Scientology, and moved towards a Gnostic mysticism dressed in Gothic robes (while preaching that Satan and God had been reconciled) before ending up as a more orthodox Christian congregation.

While William Sims Bainbridge’s academic treatise Satan’s Power might be the most comprehensive publication about The Processeans and their theology and practices, there are several good articles about the Church on the Internet - from the Wikipedia entry to Gary Lachman’s article.

Also, Feral House recently released one of the best books available on the subject.

One interesting result from this latest book release has been that some of the Process Church’s rituals have been resurrected and performed in front of curious audiences. This video shows one such ritual. And speaking of Psychic TV, yes, that is Genesis P-Orridge officiating.