Does dandyism have political implications? While Lord Bassington-Bassington certainly has political opinions, he likes to think that they have little relevance to how he dresses. Even if his taste for the classic might reveal a predilection towards conservatism. And sure, today people assume that if you dress a bit old-fashioned it's because you long for the days when the lord of the manor held sway, peasants knew their place and pheasants lived in fear.

An assumption as stupid as suspecting that all who wear jeans hanker back to the social order during the Wild West.

For men who take an interest in clothes come in all shapes, sizes and colours, from all walks of life and hold all sorts of political convictions. So while perusing an edition of The Communist Manifesto the other day, Lord Bassington-Bassington was pleased to find these comments on the connection between men's dress and revolution in A.J.P. Taylor's insightful introduction.

"None of them (Marx' early disciples) was a proletarian in the new Maxist sense; none, that is, was a factory worker. Their occupations provide striking examples of the class from whom revolutionaries are often drawn. Most of them were tailors - an occupation which gives a man much time for solitary revolutionary reflection and also perhaps an intimate distaste for the upper classes."

"In old England the village cobbler was always the radical and the Dissenter. After all, the lord of the manor had to have his boots made and mended, whatever the cobbler's political opinions."


So how better to celebrate these astute observations than to publish a picture of Russian Futurist poet Vladimir Mayakovsky? Lord Bassington-Bassington first saw this picture when still a puppy, on the back of an LP of Swedish punk and hardcore, and it's fair to say that it has exerted a certain influence on how His Lordship dresses. 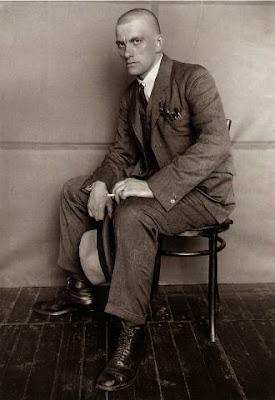