The problem of Evil: Lessons from Satanists 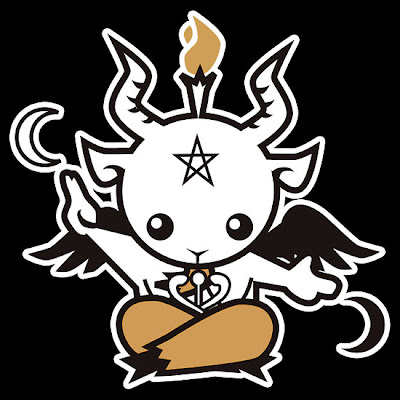 (Picture above stolen from this site, intended as free advertising).

Halloween is the day to ponder the problem of evil. And those who worship it.

A quick Facebook chat with the Norwegian translator of Anton La Vey’s Satanic Bible started Lord Bassington-Bassington thinking about Satanists. And by Satanists he means real Satanists, of the type one finds around the Church of Satan, not the reverse-Christians who tried to burn down substantial parts of Norway’s cultural treasures back in the 1990s.

The founder of modern Satanism and The Church of Satan, Anton La Vey, was one of the most interesting religious thinkers of the past century, and people who are sufficiently inspired by his teachings to call themselves Satanists are often misunderstood. Which is hardly surprising; naming a philosophy after a symbol of evil and then expecting to seen as a reasonable person would be like developing a system of teaching called Pederasty and then being surprised when local schools try to bar you from their premises.

As a result, His Lordship has always been a bit bemused (and a bit confused) by Satanists. They claim to be evil, but surprisingly often turn out to be the nicest people you’ll ever meet. They claim to be motivated by selfishness, but are often highly idealistic, whether they’re involved in animal rights work or various (usually quite unprofitable) cultural and artistic endeavours.

The question is this: Does this, pretending to be evil, greedy and selfish, while being nice, generous and idealistic, represent a form of Satanic hypocrisy? And if it is a form of hypocrisy, is it better, or worse, than when Christians pretend to work for good but turn out to be child-molesters?

Philosophers, please come to the rescue!

But whether one accepts that Satanists are evil in any real sense of the word, let's take some lessons in evil from them. So i honor of Halloween, the Chronicles are pleased to reprint this instructive course by Danish Satanists Ole Wolf and Amina Lap, with kind permission from Mr. Wolf and Mrs. Lap.

(click on the picture for bigger resolution. And if you can read Danish, it’s even funnier in the original language.) 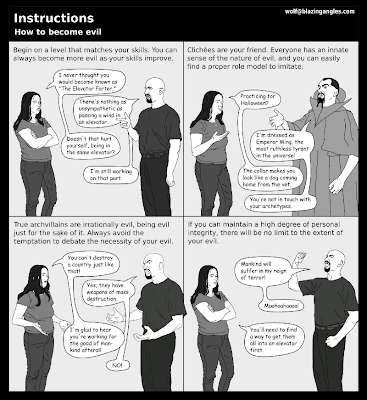