Lord Bassington-Bassington has accepted an invitation to give a lecture on the subject of none other than that Gentleman of Providence, "Grandpa" Lewis Theobald III, known to the unwashed masses as H.P. Lovecraft. The lecture is arranged by the Children of the Night, an Oslo-based association for young people of the Gothic persuasion.

His Lordship is looking forward to the event, which will take place on April 29, not just because two of his favorite DJs, the illustrious Forvridd & Molefunken, will be spinning discs before and after the lecture, but because it takes place at a café run by one of His Lordship's favorite Christian churches.

As a strange synchronicity, another of Lord Bassington-Bassington's favorite creative humans, Mr. Viktor Kvant of Scania, has produced another Lovecraftian motif. So The Chronicles hereby take the liberty of bringing Mr. Kvant's interpretation of the risen island of R'Lyeh to its readers. 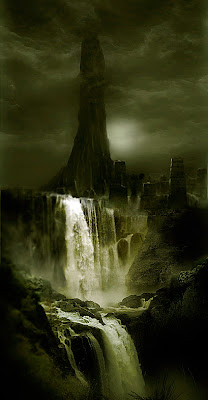 As The Gentleman of Providence himself put it in The Call of Cthulhu:

Cthulhu still lives, too, I suppose, again in that chasm of stone which has shielded him since the sun was young. His accursed city is sunken once more, for the Vigilant sailed over the spot after the April storm; but his ministers on earth still bellow and prance and slay around idol-capped monoliths in lonely places. He must have been trapped by the sinking whilst within his black abyss, or else the world would by now be screaming with fright and frenzy. Who knows the end? What has risen may sink, and what has sunk may rise. Loathsomeness waits and dreams in the deep, and decay spreads over the tottering cities of men. A time will come—but I must not and cannot think! Let me pray that, if I do not survive this manuscript, my executors may put caution before audacity and see that it meets no other eye.