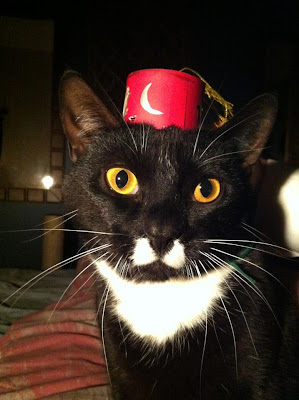 There's been a bit of a Luciferan vibe on the Chronicles lately, and Lord Bassington-Bassington thinks there's time for a bit of balance by plugging an Abrahamic creed instead. So what could be better than a feline in the ultimate Islamic headgear, incidentally also providing proofs that some cats truly match their human companions? 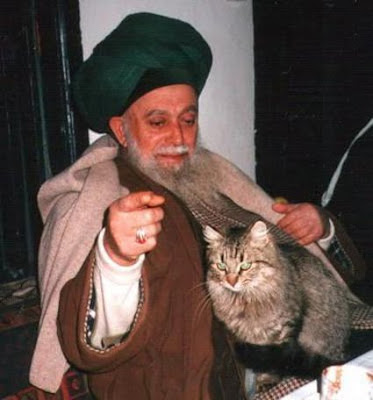 
While Muslims tend to have problems with canines, cats hold a special position in Islam, especially within Sufism, as is elucidated in this article.

Thousands of Sufi stories include cats; lovely stories such as shaykh Ashraf's Madrasa cat, which helped the teachers to bring order to the school, even sacrificed itself for the sake of the dervishes-(disciples), or the tale of the Sufi master from Baghdad, Shaykh Abu Bakr al-Shibli (d. 945) who was seen by one of his friends in a dream when he passed away, On being asked what Allah had done to him, he said that he had been granted admission to Paradise, but was asked by Allah if he knew the reason for this blessing. Shaykh Shibli enumerated all his religious duties but none of his acts of piety had saved him. Finally Allah asked him, ‘Do you remember the cold day in Baghdad when it was snowing and you were walking in your coat when you saw a tiny kitten on a wall shivering with cold, and you took it and put it under your warm coat? For the sake of this kitten We have forgiven you.’