Laibach: Victory under the sun 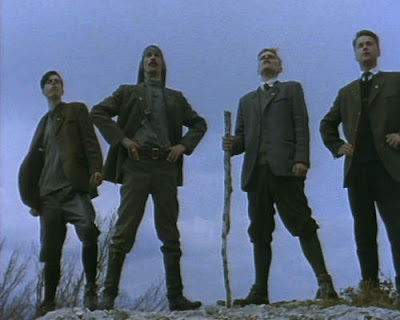 As one gets older, it's natural to reflect on the development of one's character. Or the lack of both development and character, as might be the case with Lord Bassington-Bassington.

In other words: Where did it all go wrong?

In His Lordship's case, there might be a variety of turning points, such as being exposed to Lord Baden-Powell's ideas about Scouting for Boys, and its emphasis on chivalry, uniforms and rituals in the forest, at a tender age. Or the ideas of Carl G. Jung or Rudolf Steiner.

But one factor looms larger than the rest: Slovenian band Laibach.

Laibach was a nexus for so many of the young Bassington-Bassington's interests: Radical politics, music, philosophy, religion, theatre, totalitarian kitsch, history and dressing a bit differently than what the chain stores were trying to push on you.

Laibach were like a glimpse into another world, another time.

It's hard to remember these days how interesting Laibach was before the band let itself become a joke band, taking pop hits from the West and interpreting them through totalitarian kitsch. That was fun for a while, but quickly got stale.

This Slovenian documentary from the band's early days shows Laibach at their most challenging, and had a profound influence on the young Bassington-Bassington when he was able to watch it in a film club in Oslo a couple of decades ago.

If you claim to be interested in Industrial music, you need to see this film. This film will clarify one thing: Heavy metal bands with drum machines aren't Industrial. This is Industrial.

Or perhaps, in the case of one of the band's earliest hits, "Drzava" (also featured in the film), it might possibly be called something like Social Realist Disco.