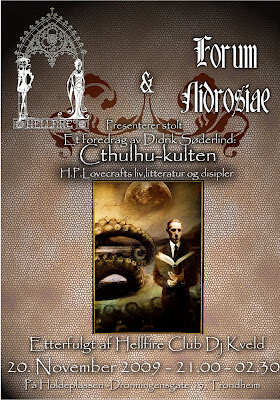 As previously reported by the Chronicles, Lord Bassington-Bassington has accepted an invitation to give a lecture on the life, fiction and mythological impact of H.P. Lovecraft in Trondheim on November 20th. The details are now in place, as the poster above reveals (apart from minor mistakes, such as not getting Lord Bassington-Bassington's name right. Well, such mistakes can be forgiven).

It's been a while since His Lordship was entirely up to speed on the subject, so to help him refresh his memory The World's Coolest Librarian, keeper of much elder and eldritch lore, brought this theologically enlightening film to his attention.