Albion, how fine your trees... 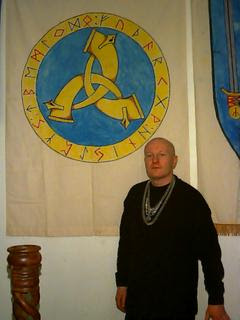 It's supposedly a common phenomenon with Neofolk fans: To start out by having problems with Ian Read's voice, but end up loving it.

Listening to Mr. Read's vocals on some early Death in June and Sol Invictus songs (Mr. Read has been a member of both projects), Lord Bassington-Bassington had reservations about Mr. Read's voice. And when the old Hound tried to listen to Mr. Read's own project, Fire + Ice, the problems were amplified. Perhaps it was the unschooled character of Mr. Read's voice? the then-young Hound thought. Later, he has come to realize that it has more to do the influence of traditional English folk singers on Mr. Read’s singing style.

However, after letting Mr. Read's voice crawl under his hide, Lord Bassington-Bassington's opinion of his vocal abilities changed radically. Meeting the most gregarious Mr. Read in person might have had some influence, but even if Mr. Read is both a very interesting modern mystic, humourist and all-round great fellow, that probably has very little to do with how Lord Bassington-Bassington thinks of his voice. His Lordship can think of several people he would probably want to bite if he ever met them, but whose voices he still appreciates, so a singer’s personality doesn't really count either way.

These days, Fire + Ice is amongst Lord Bassington-Bassington's favourite Neofolk acts. So when His Lordship stumbled upon these videos from Mr. Read's performance in Halle last year, he felt the need to share them with The Chronicles’ readers.

In these live videos, Mr. Read is supported by Barditus, the main project of Uwe Nolte, best known as one half of Orplid (more about them in some later post). Barditus' more aggressive approach to music really shows in these recordings, and give the Fire & Ice songs an extra punch that works great on the stage.

This is especially true for "Gilded by the Sun". This Spenglerian lament is one of the finest Neofolk songs ever written, but was a bit overproduced (hey, the '80s were barely over) when it appeared on the album of the same name. So the more stripped-down, rawer, live version really becomes it.

Albion, how fine your trees stand gilded by the sun
Across the land and in your fields the tree-lined waters run
But in your heart what light is there, what grows and comes to flower?
Does mind grow cold, do weakened hands let slip their ancient power?

And here's "Dragons in the Sunset" from the same concert.