Bow ties and the American gentleman 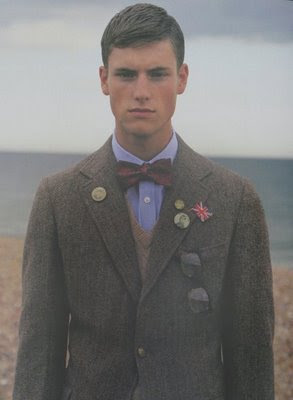 Lord Bassington-Bassington prefers ties for stylish occasions, but it's always been clear to him that some day he would experiment with bow ties. And last week, His Lordship purchased his first bow tie. We're sure The Dodologist will claim credit for this development, tireless champion of bow ties that he is, and he surely deserves to be recognized as an important influence on His Lordship's tastes. But an even bigger influence was the picture above, which is taken from one of Lord Bassington-Bassington's favourite books on style, Jeremy Hackett's excellent Mr. Classic.

Anyway, it's when you decide upon your first bow tie and bring it home that the fun really begins. For under no circumstances should you buy a clip-on. But how do you tie the bloody thing?

Luckily, the Interweb comes to the rescue, and YouTube is awash with instructional videos on how to tie bows.

The two videos below might not be the best in terms of instructional value. In fact, they seem to be meant for people who just need their bow tie skills refreshed, not for freshmen. But they are certainly the most charming. While His Lordship is an avowed Anglophile and has an ambivalent relationship with American style (there is something strange about a people who refer to suits as “sacks”), there is something to the old-fashioned American gentleman that always manages to melt the heart of any old-fashioned Basset. And those Southern accents are to die for.