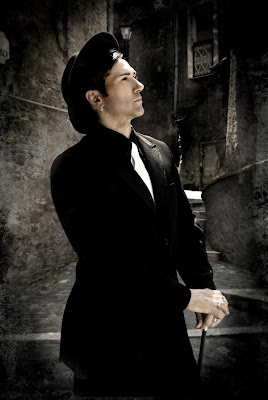 Dominik Tischleder, one of the world's leading writers on neofolk, once observed that Italy was the country where neofolk music was taken to interesting and inspiring lengths. It's an astute observation, so we here at the Lord Bassington-Bassington Chronicles will be casting our eyes southward a bit in the weeks to come. Starting with Spiritual Front, a band which keeps getting better and better. Musically, Spiritual Front has come a long way, from being a pretty typical run-of-the-mill neofolk band to their current incarnation, which owes as much to Nick Cave and Johnny Cash as it does to Death in June and Weimar Berlin.

They're also a superb live band, and understand the importance of dressing stylishly when on a stage.

The quality on this last clip is a bit dodgy, but the song is one of His Lordship's favourites, so it felt necessary to include it.